Did anyone see the email this week from Mojotone stating they have added a late 70s JMP 50 watt kit to their lineup? I wonder how it is different from their JCM 800 kit? 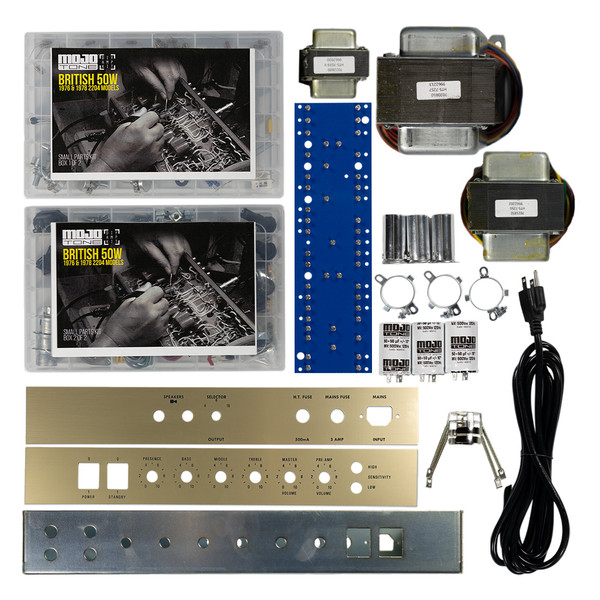 Kit Build Difficulty:EasyDifficultIf this kit shows as out of stock please check here for more information.Please read our article 'Mojotone Amp Kit Building Primer' along with our amp kit disclaimer located in the Specs tab before buying this kit.Ever heard of a guitarist named Randy Rhoads? Or...

Ever heard of a guitarist named Randy Rhoads? Or how about the Young brothers from a little band called AC/DC? They are just some of the artists that come to mind who used the late 70's JMP 2204.

In the mid-seventies, rock artists wanted a bit more gain and a lot more power from their stage amplifiers. In response, Jim Marshall and crew developed the master volume function, added it to their plexi platform, and released the new circuit as the JMP 2203 and 2204 models. With this new feature, the artist could crank the amplitude of the preamp output as they would with earlier, non-master models, to get an exciting distorted breakup of the signal. Then, they could adjust the overall output level to the speakers using the master volume control so that it sat nicely in the mix with the rest of the band. From there, we experienced a total overhaul of the rock and roll sound. Bands got heavier, and the solo leads soared higher than ever.

We are happy to add the 50 Watt version (2204) to our British series kit lineup. We had the opportunity to study an example from 1979 to create the near-replica chassis and head shell. For transformers and choke, we offer the same tried and true units from our British 50W 800 kit. The big difference between our kit and the original is the use of an old-school turret board instead of the printed circuit board that Marshall had employed. We think this will offer more fun and future serviceability to the build.

So far I have noticed a 5k Presence pot, a different bias circuit, and no voltage selector.

Looks like the chassis is smaller, like a 50watt Plexi size. It also can be wired as a lead or bass style. No rocker switches.

Wow thats a good looking amp! I always wanted a quality 50 watt JMP clone, this may be it!

I might order up the chassis and plates and move my mojo800 over to it. Says it uses the same transformers so it shouldn't be hard.

someone on another forum mentioned:

I do know that the 50 watters from that era ran a much lower plate voltage of 370-380vdc or so. This made the amp a bit browner and darker sounding than the higher plate voltage master volume models that followed in the 80's. The cosmetics on these were also different from the later models.
Click to expand...

RCM 800 said:
I might order up the chassis and plates and move my mojo800 over to it. Says it uses the same transformers so it shouldn't be hard.
Click to expand...

Mojotone pretty good quality and directions? I wonder what their lead times are?

jchrisf said:
Mojotone pretty good quality and directions? I wonder what their lead times are?
Click to expand...

mine sounds great and all the parts were quality. I built mine 11 years ago and still works fine. If I swap chassis I might do a cap job since Im gonna be in there anyways. The layout they supplied was pretty easy to follow from what I remember.

jchrisf said:
Mojotone pretty good quality and directions? I wonder what their lead times are?
Click to expand...

I waited 8 weeks for my JCM800 kit, and have everything except for the OT.

Their transformers are Heyboer
You must log in or register to reply here.