Pete Farrington said:
Bournes seem the best current choice for 10% taper pots.
For about the past couple of decades, the track CTS use doesn’t have the wiper move off its CCW end stop until it’s rotated maybe 15% of the available range.
So on a typical Marshall faceplate, that’s 0-2, ie the wiper doesn’t reach the resistive part of the track until after 2. 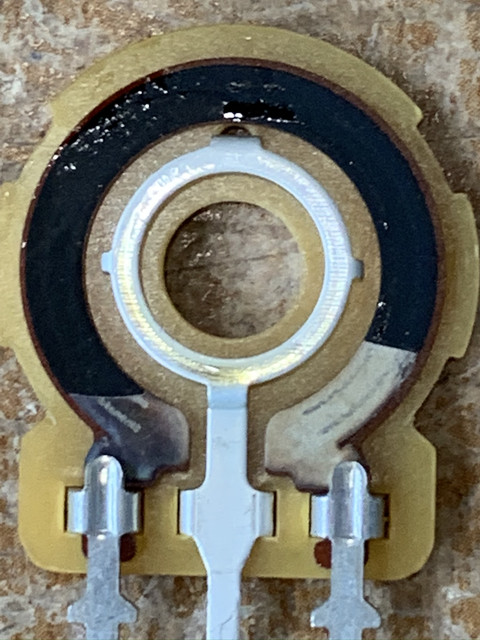 Until I saw this pic with your statement I never realized this is the reason every pot I have used for MV on my 2204s seems to have no volume until about 1.8 or 2 from 0 then at 2.1 it jumps up to super LOUD. I know I would like it to actually taper but I can never find any that do. Have not tried Bournes or a linear pot but maybe that would be worth a try for MV. Is there a way to modify the wafer? Maybe spread the carbon toward zero or file the zero edge into a taper? Need a chemical that will act like a paint thinner to the carbon strip, modify and dry. Maybe acetone?

Try it by all means, but linear is completely wrong.
It’s a shame but I’ve not found a DIY solution for CTS tracks.
Although Alpha are 15%, they’re fine really, certainly a far smoother taper than CTS.
Last edited: Dec 5, 2021

I have modified tracks before, go steady with a very fine polish or jewelers rouge etc but you can go too far quite easily.

I have several pots to practice on, and decent set of jewelers files and polish cloth. Less is more has always been my mantra. I'll see what I can do with it. My guess is if I take too much surface off it gets a bit scratchy before becoming a solid volume adjust, need a slight hand. I suppose I can measure the resistance directly on the wafer to test progress as I go.

Whatever you do, a CTS track won’t come off the end pad until after 2.
A

Something else worth mentioning. I noticed at some point in time someone soldered the middle lug to an outer lug I believe on the bass potentiometer. What would be the purpose of that?
Last edited: Dec 9, 2021

In some applications, wiring a pot to act as a variable resistance (rheostat) like that can increase reliability, as the likelihood of the circuit ever becoming totally open is reduced, eg if gunk in the pot caused the wiper to lose contact with the track, the resistance can’t increase above the track resistance.
For a bass control, it doesn’t have any benefit really; open circuit would give pretty much the same bass response as the full track resistance. But then it doesn’t have any drawbacks either.
So it’s a good practice thing, can’t do any harm.
It would be beneficial if done to the mid control of a Twin Reverb, Deluxe Reverb type of tone stack. Because mids at 10k would still be a usable Fender tone, still with plenty of the characteristic mid scoop. Whereas mids open circuit would cause a big increase in signal level and a massive thick tone.
Last edited: Dec 9, 2021
A

Silly question. The first black through hole wire on the board by the input jacks, is that essentially supposed to be wired to the ground bus? May have tracked down a bad resistor, I decided since I’m in there I’ll try to update the circuit to have cascaded gain. A couple of goofy choices seem to have been made over the years in there. If i can get it sorted out and sounding good again, I’ll likely take and rework some wiring again and tidy things up in there.
Last edited: Dec 11, 2021
N

The first black wire is the cathode ground for V1. Where you ground it is up to you!
A

neikeel said:
The first black wire is the cathode ground for V1. Where you ground it is up to you!
Click to expand...

They had previously tied it to a wiring nest at the input jack. Thanks for the response!
A

Found an 82ohm capacitor that was bad. Removed it and it was reading around 2m ohm. Replaced that, wired things up quickly and I have volume back. Could really play it whereas everyone was in bed and it being around midnight. Hopefully everything is all set now.
A

Got the amp back up and running. Thanks for all the help. Didn’t need new pots in the long run, will likely replace them eventually. When working the cascaded gain update, it says to install a 1000pf cap on the gain pot. What does this do? What would lowering the pf value do? I don’t have any 1000pf caps, but I do believe I may have a 470-500pf cap.

Some people try different values there, some people remove it completely. The 500pf cap will make the high gain channel a little less bright.
A

I just got a chance to play for a few mins. I noticed this sort of ticking noise coming from the amp. Louder when I turn it up. It does get a little quieter when I palm mute. Any ideas?

Is your cellphone sitting on the amp? Ticking might be interference from something in the room or nearby.

If I heard a ticking noise like you describe I would eliminate (power off) any electronics nearby, wifi router, printer, modem, lights, fans, motors, metronome, effect units, washer dryer, cell phone, any time devices, anything that blinks, get the guitar as far away from the amp as possible, keep the phone out of your pocket for good measure, etc. If it goes away then one of those devices is a likely culprit. If it doesn't go away come back with what you have found, record the ticking and provide a link to it here. Its hard to speculate a ticking noise unless you hear it

I have had issues with persistent ticking or keep alive signals from electronics. Any venue I play in, during sound check I walk around with my guitar set at high gain and use it as an sort of antenna to find sources of noises and eliminate issues before the performance. You would be surprised what you can find doing that.

@Chris-in-LA You beat me to it

Seems like I got that sorted out. Not sure what it was in the end. Next up a sir #34 mod, after I install some resistors to the tube sockets and get her biased up.

XTRXTR said:
Until I saw this pic with your statement I never realized this is the reason every pot I have used for MV on my 2204s seems to have no volume until about 1.8 or 2 from 0 then at 2.1 it jumps up to super LOUD. I know I would like it to actually taper but I can never find any that do. Have not tried Bournes or a linear pot but maybe that would be worth a try for MV. Is there a way to modify the wafer? Maybe spread the carbon toward zero or file the zero edge into a taper? Need a chemical that will act like a paint thinner to the carbon strip, modify and dry. Maybe acetone?
Click to expand...

These are the current production CTS with the pale cream boards, earlier versions with the brown boards are more spread as far as I remember. I just pick up NOS when I see them, but certain values you're up against the guitar restorers.
You must log in or register to reply here.