Anybody else hate brown JCM fretcloth?

I have to believe that both of mine are 85’s

All of the examples posted are killer….
Love the look. Keep em coming.

V-man said:
I am sure there are more than a few who look upon that defective dye’s fading properties as fondly as a mellowed yellow Gibson that was white back in the day, but I can’t stand it. It is such a dark brown, framed 90% of the time in black tolex, which is one of the worst clashes possible. Possibly one of the amps I’d like most for purchase consideration in trashed condition as I’d have no qualms ditching that awful headshell cab

To the aforementioned Gibson analogy, I think it went over as well as this “blueburst“ (silver corona w medium blue burst) that has since yellowed into the infamous greenburst/“puke-burst,” where the overwhelming majority have some appreciation for the factory color (when rarely seen), but few care for the yellowed transition.
View attachment 112959
Click to expand...

I'd play the hell out of that V. I liked the Designer series from the '80's though...

As far as Marshall grille cloth, I'm all about the large check style.

I don’t mind it though I see how someone else wouldn’t care for it.

But the Gibson comparison needs the silver burst ….the originals turn an absolutely disgusting green color

Location
Across the World

Hate is a strong word.
I think if the head matches the cab, it don't bother me.
If you really hate it.
Sell it really cheap, donate to a young musician, or.
Get out some whoop ass and deal with it.
Can change, or dye the cloth, any color you want. 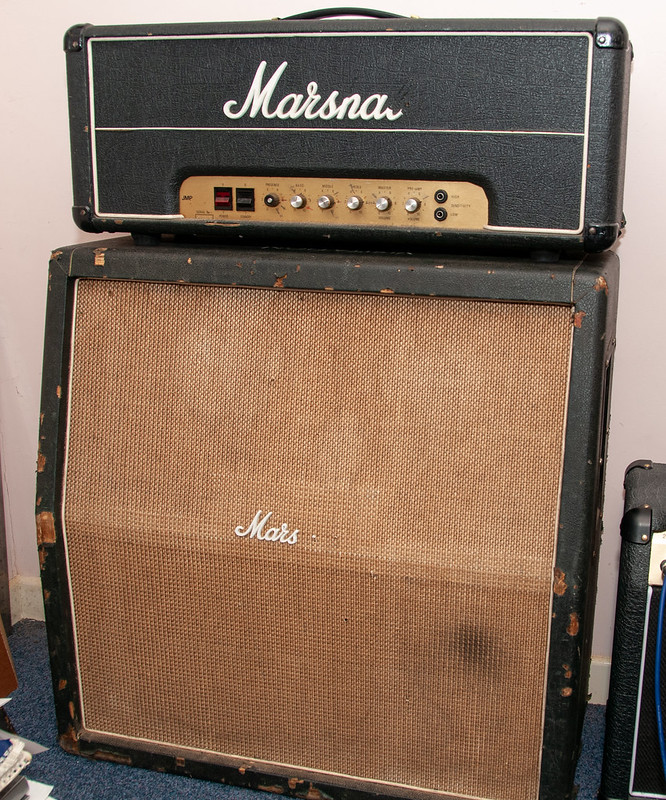 Anyone knows how to dye the plain black 800
grillcloth into the nice tancolor?

I put some small samples of the black cloth
into bleech and peroxyd a couple years ago but as i remember right it didnt show any reaction at all.

Dude, that is truly a thing of fu$&ng beauty!
That cabinet has a story.
T

Tatzmann said:
Anyone knows how to dye the plain black 800
grillcloth into the nice tancolor?

I put some small samples of the black cloth
into bleech and peroxyd a couple years ago but as i remember right it didnt show any reaction at all.

renips said:
Dude, that is truly a thing of fu$&ng beauty!
That cabinet has a story.
Click to expand...

I have to admit it has grown on me, years ago it bothered the heck out of me but now I actually dig it. I think it's mostly due to what it is... a mid 80s (vintage) Marshall and now I just kinda recognize them of having that trait.

Personally I prefer Marshall's earlier styling pre JCM800. I love the old salt and pepper grill cloth and I also like that 70's checkered cloth. I can deal with the JCM800 as it indeed has become synonymous with modern Marshalls.

Oddly the Lead 12 I just picked up is an '84 and the grill cloth is fine, must have been an early one?
B

All of the faded to tan Marshall grill cloth that I am ever seen revealed all of the beer stains on them and just looked bad over all.